I would like to take minute to reflect on the UK entry for Eurovision by SuRie with her song Storm. You can not plan for the unexpected and while SuRie belted out her song a male protester snatched Surie’s microphone away while she was singing live. To say this action should have stunned SuRie and put her off balance a bit would be an understatement, she shown no such signs. She was quickly given a new microphone and SuRie carried on singing extremely well, and with a great stage presence with her. How she managed to do just that, I believe, is the measure of who she really is. Graham Norton later said the male protester had been arrested. It does appear now that this male protester was targeting the UK entry specifically stating irrational thoughts. I hope this protester has some sort of action taken against him so he can not do this sort of thing again. We will probably never know whether SuRie singing her song a second time would have helped us win the Eurovision Song Contest, sadly I’m not sure it would have done as the judges themselves don’t really seem to have given the UK any consistent good scoring. The viewers results did though and our eventual score was 48, and finished 24th (out of 26). The best of luck to you SuRie in your future career now, and I guess someone in that industry will already be thinking “who should the UK entry be for Eurovision Song Contest 2019 in Israel”. My dream would be that Lolly (aka Anna Kumble) would be asked to be our entry for 2019. Many thanks to you all for reading this blog, I hope it did SuRie some justice. 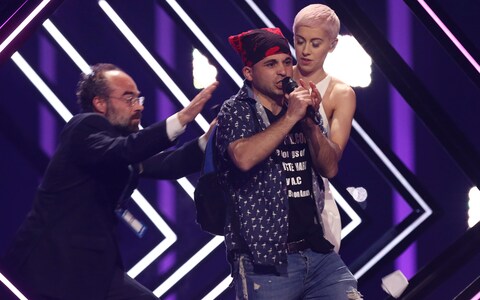